When my A-team of friends, Aminah, Anaam, Asma and Ayesha, came over for a weekend of good times, I made them one of my favorite dishes: “Pizza-kopita”.

“Spanakopita”, also known as spinach pie, is a Greek dish consisting of layered fillo dough filled with spinach. Arabs also make it, usually with either spinach and cheese or beef, and call it “gulash” (nothing like the Hungarian “gulash”). My mother makes this dish a lot and one time, wanting to experiment with a different filling than the same old same old, I suggested she make it with pizza filling.  She was skeptical at first, but when she gave the idea a chance, she and everyone else who tried it loved it.  Now, pizza gulash, as we call it, is my preferred kind to make (and eat); I call it pizza-kopita for fun (and ’cause gulash is not really understood by non-Arabs :).

This one was filled with white onions, green onions (aka scallions), tomato sauce and diced tomatoes (yes, from the can) and some spinach.  I also added a bit of mozzarella cheese just to make it a bit more like pizza.  I used organic whole wheat phyllo dough, which for whatever reason is very flaky and quite challenging to use. But, I managed to top it with sheets that held together so it would at least look decent.  They enjoyed it, alhamdulillah (Thank God).

The next day (Saturday), I had to prepare for the Sunday brunch.  The plan was to make French toast using “Maple Oatmeal Bread, which was listed in the “WInter” section of the Four seasons bread book and which the author said can be used to make “the best French toast you’ve ever had”. So…not wanting to miss out on the Best French toast EVER, and wanting to test it out (on my friends, lol), I made the bread that evening (whole wheat, as usual). After baking it and letting it cool, I sliced it and let it sit on a wire rack to air out and go stale. Stale bread is an important component of making GOOD French toast. 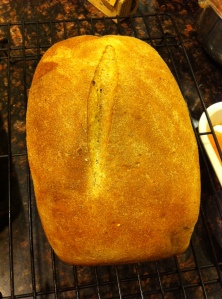 I made the French toast the next day, Alton Brown style, which is actually completed in the oven – baked for 5 minutes after cooking it on the griddle.  I did slightly vary the recipe, making one dairy free using almond milk and coconut cream (not milk), instead of half-and-half.  I also made one WITH dairy, but not using as much half-and-half as he suggests, since a) I had organic half-and-half which was expensive and b) I didn’t want to use up all the half-and-half and leave none for coffee. Here’s what they look like when done (these are not from the same bread, but from the Challah bread I made and wrote about before).  It’s not the best picture, but I like how the oven light makes them look all heavenly. 🙂

The French toast was done by the end of the brunch gathering, so I took that to mean it was delicious. 🙂

Here’s a better picture of what they look like, done in the oven: 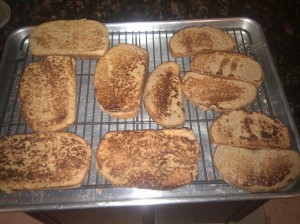