This Monday, after coming home from my job’s holiday “party” (which consisted of listening to lectures, information about insurance and playing Bingo), I thought about what I should make for dinner.  Since my mom was out, the kitchen was mine for the using and I could do with it as I pleased. And, as many homemakers find themselves asking the same question, I had the same answer –  I couldn’t think of what to make.

I had been wanting to make pizza from scratch for some time, especially since we order it every now and then and, despite my attempts to be dairy free, I LOVE pizza. Also, it’s still good cold, so I can take it to work for dinner without worrying about heating methods. But, I’d prefer home-made, to be able to control what I put in it and how healthy I make it.

After not being able to think of anything else to make, I decided to go with pizza. I used the pizza dough recipe from “Bread Machine Baking” by Jennie Shapter, using the two dough sized measurements (and using whole wheat bread flour instead of white). My family’s bread machine has a “pizza dough” setting, so I set it to that. I also added oregano to the “extras” compartment, to add some herby goodness to the dough itself.

After the dough was made, I rolled it out… 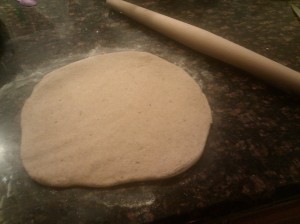 As for the actual pizza itself, I decided to make it a “leftover makeover”. My younger brother is a good (maybe great) cook, who has a knack for “remaking” things. He can take leftovers and turn them into something else, that’s distinguished in flavor from the original, even if just slightly. I dubbed these remakes “leftover makeovers”. For this “leftover makeover”, I was going to use the onions and zucchini (in sauce) that my mother had made the previous Friday. (Side note: Many Egyptian dishes consists of a vegetable in a tomato-based sauce, that’s usually eaten with rice or bread). 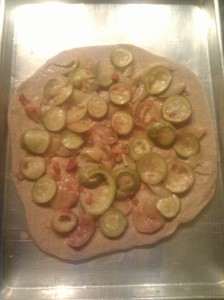 And after the toppings came the the sauce (which I made from scratch as well, but wasn’t as great as how my brother makes it) and then the cheese. 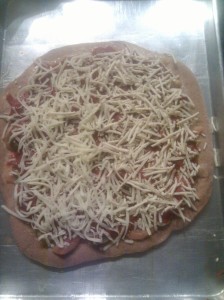 For the cheese I topped half with organic mozzarella and the other half with…wait for it…vegan cheese. Yes, dairy-free mozzarella cheese. I used the Daiya brand which I’ve heard is better than others, and which is soy-free. I’ve used it before and liked it.

Guess which side had the vegan cheese?  The package says “it melts!” And I remember it doing so in the past, but maybe it takes a lot longer than regular cheese. 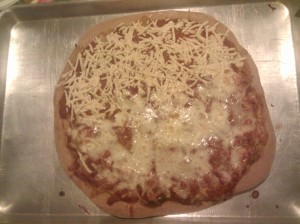 Apparently and not surprisingly, my brother needed way more (real) cheese on the pizza, because he topped it with more mozzarella cheese and stuck it in the microwave for a bit to melt, lol. He also told me that toppings were supposed to go on top.  I though Alton Brown said something about the topping and the spices going before the cheese or after the cheese; I couldn’t remember which was which.

That night, my brother prepared the dough for the next pizza for the next night. he stretched it out to the whole pan and made another (better) sauce from scratch, adding spices, cranberry-berry juice (he says grape juice is usually added) and (of course) ghee. 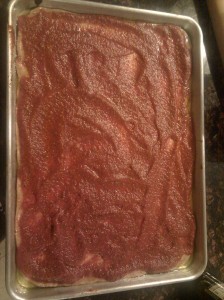 And, when he made pizza the next day, he put the toppings, well, on top! (Picture is not that great; it’s from the new phone). 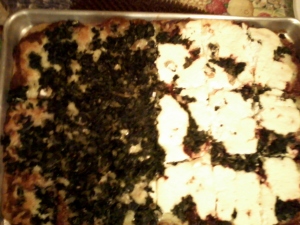